How to Find the Right One for Your Business.

In the following blog post, we hope to give you some things to consider to help you make the most informed decision. Throughout this blog post, we often use the term Facebook ad agency and we want to make sure you understand that the encompasses all the areas that Facebook ads place ads including Instagram and the audience network. 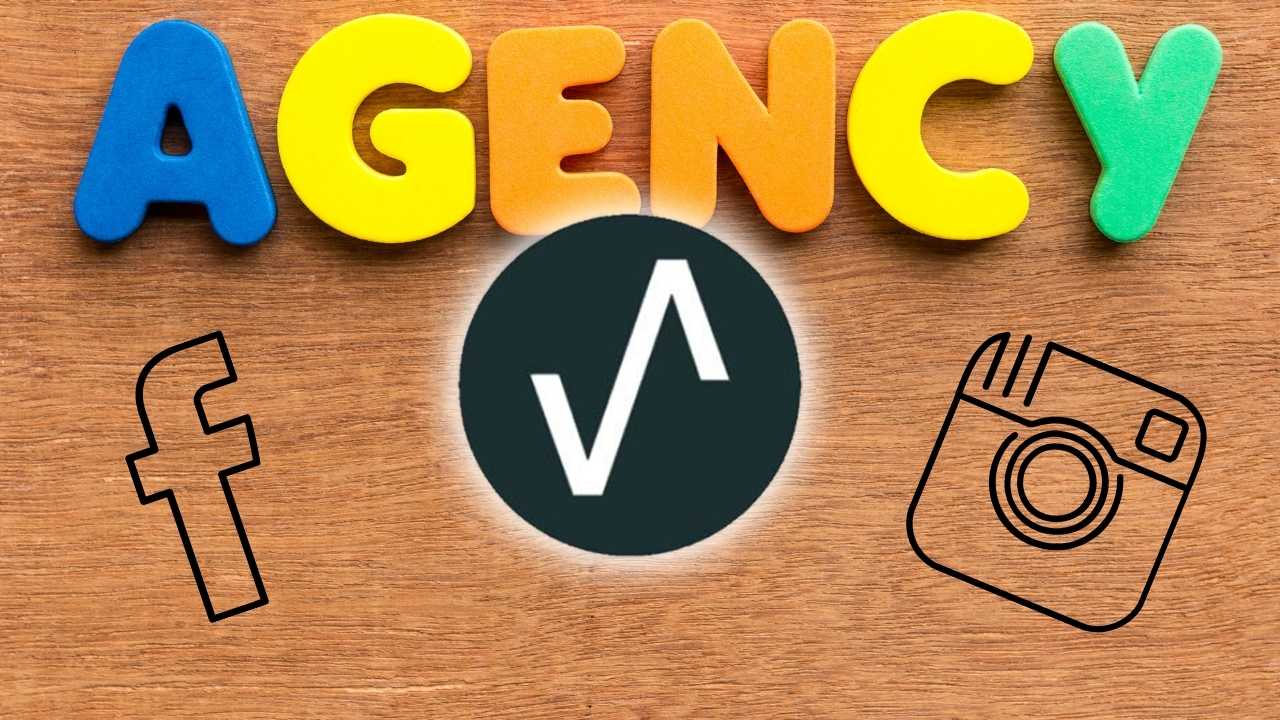 Facebook Marketing Agencies: Research and set up, will lead to success

This is often the step that most Facebook marketing agencies want to skip but it’s one of the most important steps.  This is the foundation of any successful ads strategy and really separates the okay facebook ads agencies from the great agencies. The reason it often gets skipped is that it can be quite technical.

One of the most influential steps in setting up the pixel or piece of code from Facebook on your website.  It helps both your Facebook ad agency and the platform to 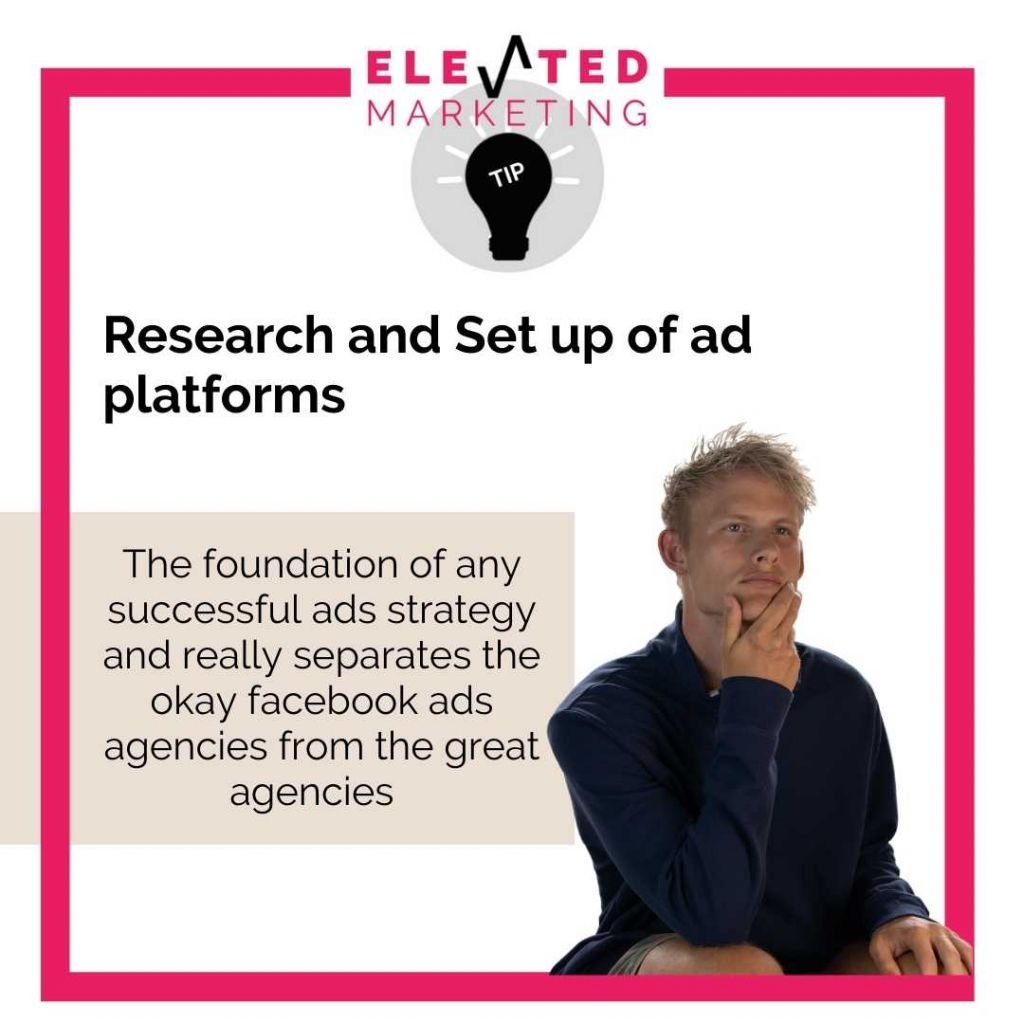 understand what happens to the ad traffic after it gets to a website.  The pixel also helps Facebook ad agencies and Facebook understand the attributes of the audience that has been to a website. Even beyond the Facebook platform, there are many digital marketing tools that can be used to find your audience.

One of the most crucial aspects is setting up the pixel is tracking the desired actions of your website or conversions.  Once your Facebook ad agency or Facebook knows this, they know how to build profiles of audiences that are more likely to do this desired action.   There are also more technical aspects with everything that happened with Apple and the IOS14 update to ensure that this data can be better tracked.

Outside of the pixel, there are many other research steps that need to be taken by your Facebook ad agency.  Facebook has several ways to target your audience and all of these ways need to be researched to develop several different Facebook and Instagram audiences to be able to test.  These audiences are built from audiences that are considered cold or Top of Funnel in your Facebook and Instagram marketing funnel.  The other audiences that are also time-sensitive are warm, the bottom of the funnel, or BOF.  These are often called remarketing audiences.  They are time-sensitive and do not start to collect data until you set them.

Another aspect that is part of research and setup is your Facebook ad creative and messaging.  Your Facebook ad agency should be first looking for inspiration from your competitors first to see what has been tried before and will garner engagement.  It must also be considered what type of creative that you start with to test.  There are so many different elements of messaging and creative that need to be tested.

As you can tell from the above setup, your Facebook ad agency has to have data geeks on staff to do the research and set up but also much more beyond that.  With any type of digital marketing, there is data to study to understand where the process of interacting with your ad is broken. Facebook ad agencies are often looking for trends of going up or down to make data-driven decisions on whether to move forward or start over with a hypothesis that has been formed.

It’s often misunderstood that Facebook ad agencies have exact ways to garner results.  What they actually have are a series of hypotheses of what they have formed and tested and have seen results.  This history of knowledge allows them to make informed decisions about where to go next.  But your Facebook ad agencies know that what works on one account does not necessarily work on another account.  It is often a moving targeting and means you need to understand the data within each Facebook ad campaign.

Facebook Marketing Agencies: Understand the value of a funnel

As we talk about data we are looking at it in the way of a funnel of interactions from did the consumer see my ad to did they interact, to did they do the desired 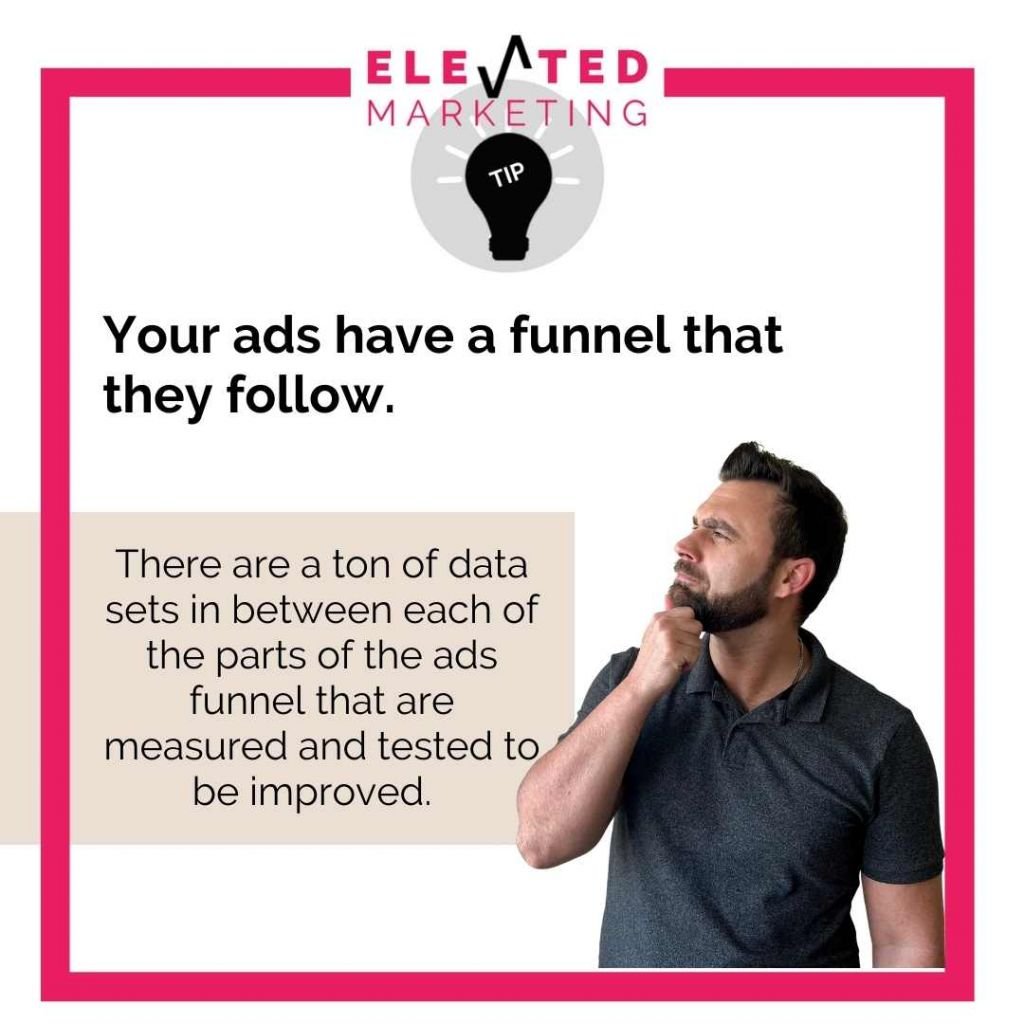 There is a whole other funnel that is happening though outside of the ads funnel.  This is the funnel that your potential client takes from being introduced to your product and service to the actual purchase. While there are some products that have a % of sales that might happen on the very first time of seeing your product or service most do not.

In fact, 95% of people do not make a purchase for the first time after seeing a product or service.

This is where your Facebook ad agency needs to build marketing funnels of interactions with your brand to get someone from point a to point b.  This can be done with types of campaigns such as remarketing. Remarketing can be done within the Facebook platform but you should not use an approach in your marketing for a single channel ad strategy.

There are other platforms and types of marketing that will contribute to the funnel of your marketing.  Relying on just one channel puts too much of your power into one platform.  Algorithms of platforms are volatile and putting all your eggs into one platform can be dangerous. There are also evolving ways to do remarketing.  With recent changes, Google performance max has become a comment player in the remarketing space.

But it goes further than platform choices for your Facebook ad agency.  This can be one of the most powerful places to say the right things in the path of purchase to keep a prospect moving forward.   The “messaging” and “creatives” used are very different from the beginning to the end of the funnel.  What you would say to someone who just found out about your product or service is different than when someone is ready to buy. You want to always be testing.

Facebook Marketing Agencies: Know the value of a good creative

When planning out your funnel your Facebook ads agency will start to think about the actual creative used in your facebook ad.

In the funnel of the ad process, your Facebook ad agency needs to think about the very first thing they will battle.  Can they get someone to stop scrolling on their feed and pay attention to your ad?

If they can’t get someone to stop scrolling then nothing else matters.  This important aspect means your Facebook ads agency often has to use creative elements to make your ad stand out, be different and cause a reaction.  This can be done with simple elements such as slight movement, color choices, and types of creative.  Facebook has several to choose from and they need to be all considered.

Your Facebook ad agency also has to be very ready to switch new creative in and out as consumers start to experience ad fatigue.  If Facebook starts to see that no one is interacting with your ads, then the platform starts to decline your reach and show your ad to fewer and fewer people.  This causes the same audience to see your ad over and over and become fatigued with the ad.  You can also see this with a decline in the click-through rate of the ad.

Once Facebook has chosen an ad that views the winner based on the marketing objective you chose when setting up the ads it will show that ad the most.  Your Facebook ad agency has to be prepared to reset the campaign and creative to keep the algorithm from becoming stale.

Your ads can not read like an ad but must cause emotion. Emotion can be caused by the images and video used but most often influenced by the words that your Facebook ad agency uses in its ad copy.

Your ad creative needs to tell a story to get a consumer to consider your product or service.  The most important story it must tell is the “why”.  Why does the 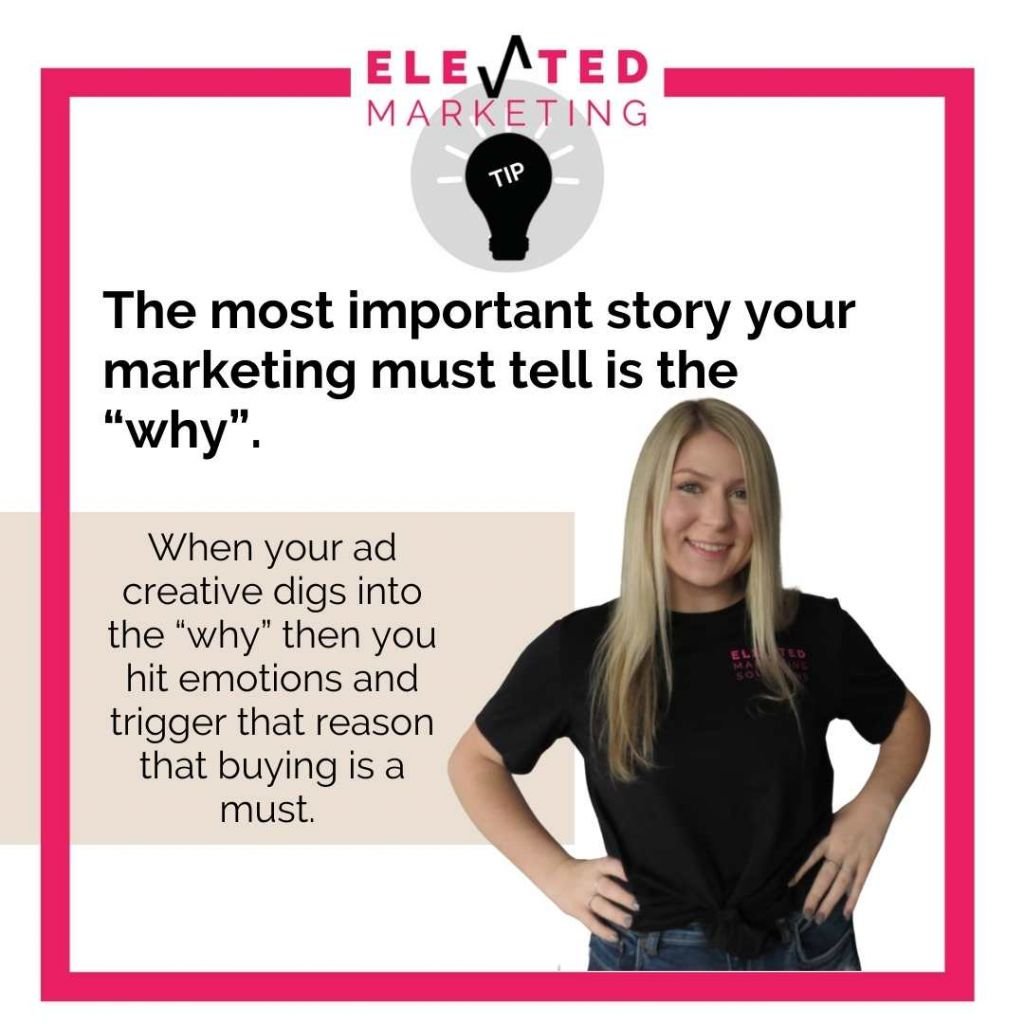 consumer need your products or service?  What problems are you able to solve to keep the consumer moving forward.  When your ad creative digs into the “why” then you hit emotions and trigger that reason that buying is a must.

Often Facebook ads agencies focus too much on the “what”, which can be good further down the funnel of the ad sequence but at first you have to catch someone’s attention.  There are certain words to use in your marketing to evoke emotions.  They are even tricks in starting at your ad copy and getting to where someone has to click “more” to see the rest of the ad copy.  This causes “engagement” with an ad and can reduce your cost.  Another form of engagement is to elicit comments, likes, and shares.  Your facebook ads agency needs to be careful here ad cannot directly ask that someone does one of those actions as Facebook does not like that.  But what they can do is use ad copy that evokes emotion and causes one to want to comment, like, or share.

There are also different forms of copy from short couple sentence creative ad copy.  Too long, story-telling type creative.  The important thing to recognize is to always test your creative massaging!

Your Facebook ad agency will know that any ad platform, not just Facebook is a moving target.  The rules are constantly changing on what they are looking for to be able to best optimize.  They must always stay in the learning phase and never stop growing.  Once a Facebook ad agency because stuck in one way or another they start to become stale.  They must always be testing and listening for other ways to become better at what they do.

Check on your Facebook ad agency, are they tooting their own horn or do others write reviews on their agency?  Do they receive marketing agency awards for being the best? They might always provide case studies but we here at Elevated challenge case studies.  They can make any situation look good in a  case study by showing at the very moment the campaign looked good.  There is always a way to take data and tell the story you want to tell.  For this reason, we do not have case studies.  It’s not just important to tell the story of the ups but also how did your Facebook ad agency get out of the downs.

As you can see from above there is a lot to consider when choosing the top Facebook ad agency.  Your Facebook ad agency has to come to the table with a strong ads strategy that will help your business win in the world of marketing.  Hopefully, this helps you in your decision and the questions that you ask.