Skip to content
What Are Local Conversion Actions and How Are They Affecting Your Google Ads Data?

What Are Local Conversion Actions and How Are They Affecting Your Google Ads Data?

In this post and video, we explain the effect of local conversion tracking and how to interpret the associated metrics.

Simply put Google has decided to start giving more credit to the Maps section of the Google search results and the actions that take place from the ads that are being placed there.

If you are inside of your Google Ads program and you have added location extensions then your ad can now show when you do a Google search. For example, typing in a search for ‘residential landscape design Indianapolis” yields listings on Google maps. Note the ads showing in the first position in this search.

So, what has happened is now we can get more data on those ads placed in the local map section.  Google has introduced these new conversions and they are Local Conversion Actions. 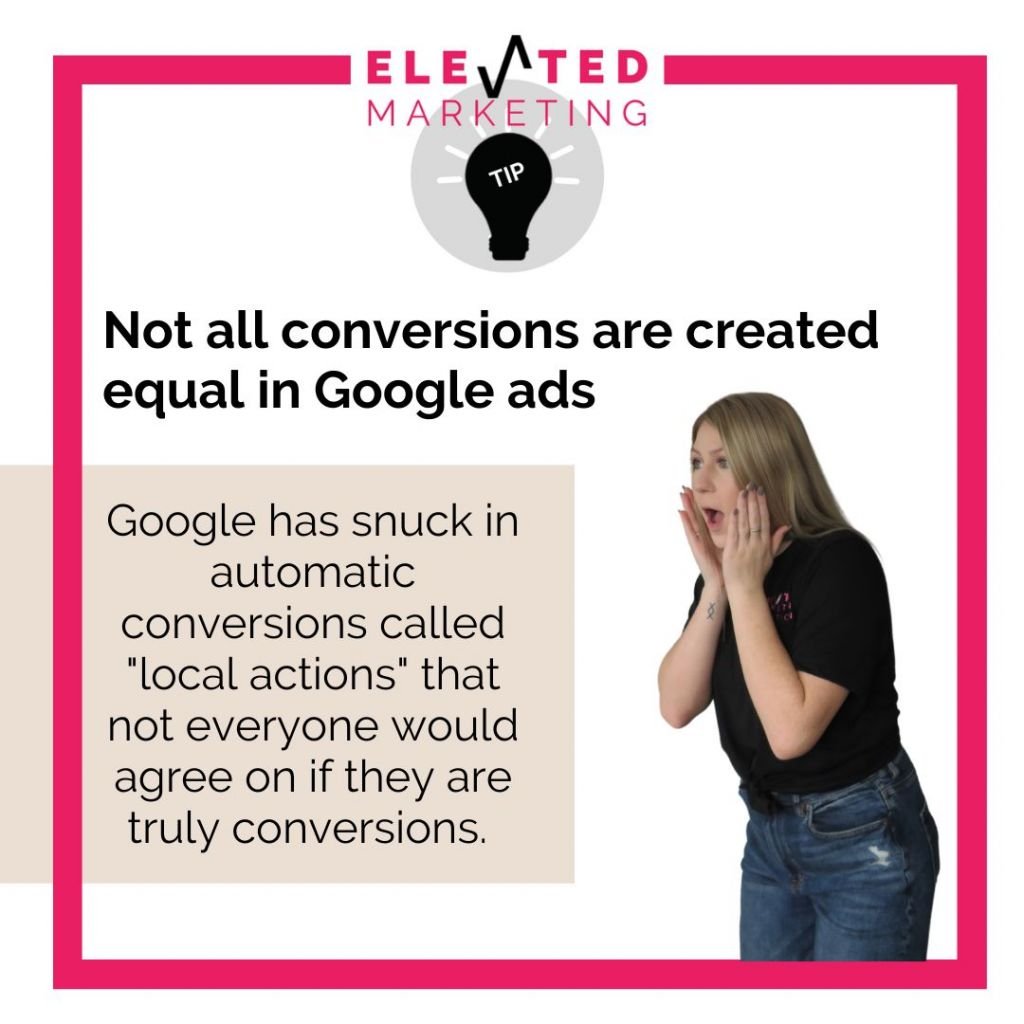 Local Conversion Actions are automatic, and as stated earlier, you can’t opt out of them. In our opinion, there are a lot of issues with the types of conversions that are now being added. When you take a look, we agree with some and not with others.

The Good and the Bad About Local Conversion Actions:

Looking at the list, we agree with some of these as legitimate conversions and not so much with others.

Let’s look at “Driving Directions”. Someone clicking to get directions would be a conversion – they are trying to get to your business. But we have seen these and it’s not relevant to a business as they don’t take business at their location.

Here is a bad example “Website Visits” metric is very debatable. So if somebody clicks on the ad in the map section, and then decides to visit the website, Google is automatically calling that a conversion? That is nothing different than a click to a website that we could have from an organic post, and we think it’s very disappointing that Google is calling that a conversion.

How about “Other Locations”. So things such as sharing my location and saving a location are now considered conversions inside of your Google Ads program. Again, those to us are not conversion actions, and so we’re disappointed that those are now being counted.

However, “Menu Views”, the fact that someone viewed your menu, isn’t a conversion action in our professional opinion.

So, while we applaud Google for adding the ability to get more information about the interactions that are taking place on my maps through the Google Ads program, we don’t think it’s giving an accurate picture in some instances.

How Local Conversion Actions Could Look in Your Reports

Here’s an example where Local Conversion Actions may not give an accurate representation of a conversion. In Google Ads go to your campaigns and look at all conversions. When we compare the numbers for the past 30 days and the previous 30 days, we are ecstatic because we have 14 conversions versus 9! That’s fantastic! I’m doing 55% better. Or are we?

And once we do that, then when we start to see those additional actions. So here is one of those local actions that are automatically being counted, and it’s for a website visit. we would not consider that a true conversion.

So, there you have it. Local conversion actions are here. They’re automated conversion actions, going from your map section, from when you do a location extension inside of Google Ads. You’re opting into the map section where your ad could show at the top. If you are looking for tips to keep those conversions up, here is what your ad agency should be looking at on the actual Google ads and the landing pages. If you are all the way back at looking at overall conversion optimization, start here.

Tired of not getting results?

Let’s chat about what’s missing with your Online Marketing Strategy!

Join Our Newsletter and
Enter To Win a FREE

While this is a value of over $2,000....
we give it away to very one lucky person once a month, could that be you?
All you have to do is sign up for our newsletter!
Learn more about this offer
and what a digital marketing analyis is here.

Powered by Convert Plus
Share this awesome stuff with your friends!